For some reason I always associate this creamy, lemon-herb dressed Cucumber Salad with summer, farm stands and grilling, but last week I happened to have all the ingredients in the refrigerator and was looking for an easy side so I made it with Apricot Glazed Pork Tenderloin.

I realized I be totally crazy saving this easy, tasty, healthy side dish just for summer.

You can make it with full fat sour cream but I’ve abandoned that ship for plain Greek yogurt in a lot of recipes, saving my calories for dessert.

Back in the day when bell-bottomed hip huggers were in style (the first time) and I could eat pretty much anything I used to enjoy this Cucumber Salad with full fat sour cream.

Today I rarely buy it unless my son-in-law is coming for dinner because I know he prefers it. I top baked potatoes and even nachos with plain Greek yogurt and I haven’t looked back. Not even a peek. 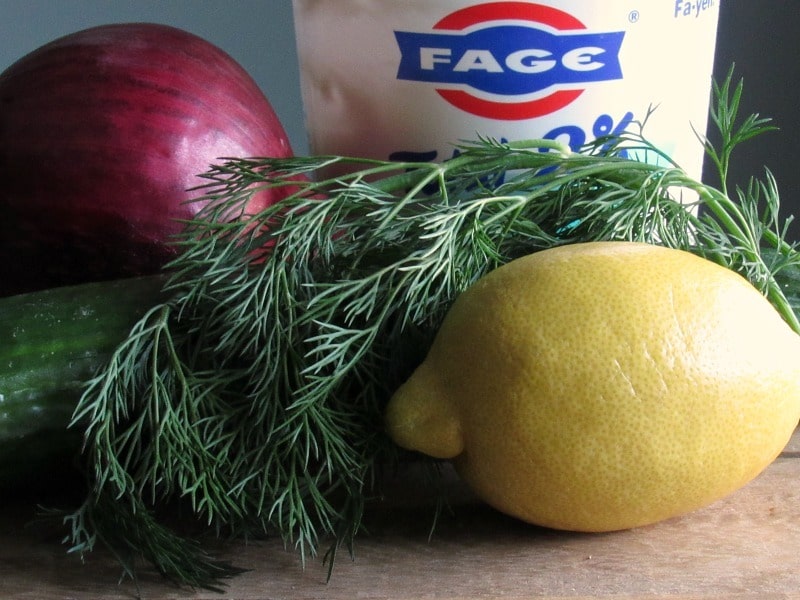 In a medium size mixing bowl, blend the yogurt, onion, lemon juice, dill, vinegar and milk then season with salt and pepper according to your taste.

Thinly slice the cucumber leaving the skin on then add the slices to the sauce, combining well. Cover and refrigerate 10-15 minutes and give it a light stir before serving.

If you love the flavor of cucumbers and dill in a creamy sauce, then I urge you to try one of  the most popular recipes on the blog several years running, Cucumber Dill Salmon.

If you tried this Cucumber Dill Salad recipe or any other on the blog, don’t forget to leave a comment or star rating ~ I love hearing from you!

Midwestern food-obsessed woman who runs with scissors and talks to strangers. You’ll find recipes that won’t just check the evening meal box but are elevated enough to entertain with plus appetizers that make entertaining stress-free. Simple ingredients . . . delicious results. Click to read more

Brought to you with love, cheese and a little bit of wine; 2016, A Gouda Life